Depending on where you live, it’s vital to know and follow the state’s requirements regarding where to ride an electric scooter. Doing so increases your safety, other road users, and puts you at no loggerheads with the state.

So can electric scooters be used on sidewalks and bike lanes? The rules that govern e-scooters on bike lanes and sidewalks differ from state to state and city to city.

For example, 10 States outlaw the riding of any type of scooter on sidewalks. On the other hand, some states such as Delaware and Pennsylvania don’t legalize scooters on Public Street.

Note: ElectricScooterCritic.com is reader-supported. When you buy through links on our site, we may earn an affiliate commission at no added cost to you.

The only time you are permitted to ride on a sidewalk is when getting into or from a nearby property. But you can pack your electric scooter on the sidewalk so long as it satisfies the following conditions;

Use of Electric Scooters on Bike Lanes

When it comes to bike lanes, the California laws specify the bikeways where motorized scooters and bicycles can use. However, e-scooters must not speed beyond 15mph. Besides, in traffic laws, bikeways fall under different categories.

The Class II bikeway is characterized by continuous white on either side. Between the white lines, it bears the picture of a bicycle. You’ll find it on the right-hand side of the street and permits one-way riding.

The California traffic rules allow e-scooters to ride on the class II bikeways except on the following exceptions; 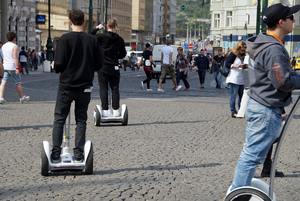 Traffic permits e-scooters to ride on Class IV bikeways. Nevertheless, unlike class II bikeways, they support more than one-way driving. Also, they have a physical barrier that separates them from the street. But you must not ride the scooter beyond 15mph.

In Arizona, the laws regulating the use of electric scooters fall under those that apply on motorcycles, mopeds, and bicycles. The maximum speed for an electric scooter thus comes into question in determining where to ride it or not.

For electric scooters with top speed below 20mph and motor power below 750 watts the rules of electric bicycles or electric-assisted bicycles holds. Besides, the laws allow the use of such scooters anywhere a bicycle is permitted.

Sidewalks; that means In Arizona, you can ride e-scooters on sidewalks. But you cannot use them on highways or traffic lanes

Bicycle lanes; you can ride them on bicycle lanes. However, whether you ride an e-scooter on a sidewalk or bicycle lane, the scooter must carry the rider only.

Scooters with a top speed of 25mph and Braking Power of 1.5horespower

If your e-scooter’s top speed is more than 25mph then it follows the rules governing motorcycles. Therefore riders aged below 18 years must wear helmets.

Also, such scooters cannot use sidewalks or bicycle lanes. Instead, they must use highways permitting the top speeds.  Also they can carry a passenger as well.

In Michigan State, there aren’t any express laws for electric scooters. Instead, they are covered by the same laws governing the electric skateboards.

Besides, persons under 12 years aren’t legally permitted to ride electric scooters or skateboards on the road, highways, or roads. Otherwise, those under 19 must put on helmets first.

Michigan e-scooter laws permit you to ride electric scooters on sidewalks. However, when doing so, you must yield to others walking on foot and in traffic. Also, you must make an audible alert when passing.

The state also allows you to park your electric scooter on sidewalks in a way that doesn’t obstruct either traffic movement or pedestrians. Nevertheless, municipalities can further make statutes that restrict the movement of e-scooters on sidewalks in particular places.

When it comes to bike lanes, Michigan’s laws aren’t so clear. To start with Michigan’s Vehicle Code doesn’t illegalize riding of motorized scooters on bike lanes.

But the Uniform Traffic Code governing villages, cities, and townships, regard motorized scooters as vehicles.

The Uniform Traffic Code further prohibits owners from riding vehicles on or across bicycle lanes.

The only exception when the law doesn’t hold is when entering or leaving the adjacent property. In other words, a municipality can adopt the Uniform Traffic Code and thus prohibit e-scooters from bike lanes.

Every country has its laws and regulation on riding electric scooters on bike lanes and sidewalks. For example, in the UK, you are permitted to own an electric scooter and ride it on private land, provided you have the owner’s permission. However, it’s prohibited to ride e-scooters on any public road, path, or lane.

In Germany, you can ride motorized scooters on roads and cycle lanes. But it’s illegal to take them to the pavements. Also, the law requires that the rider be at least 14 and stick to a maximum speed of 20 Kilometers per hour.

The case is no different in France where scooters can use cycling paths and streets. But the same law prohibits motorized scooters from using sidewalks. And the law limits the scooters to city roads with a permissible speed limit of 50km/h. The scooters, on the other hand, must not speed beyond 25km/h.

When using your electric scooters, you must mind about your safety and other road users as well. Besides wearing the safety gears, you should know and follow what your country, state, or municipal requires of you.

So can electric scooters be used on sidewalks and bike lanes? The answer is yes and no. It all sums down to your location. For example, as outlined in the post, UK doesn’t permit the riding of the e-scooters in any public place.

As an Amazon Associate electricscootercritic.com earns from qualifying purchases

Comprehensive electric scooter reviews from all of the top manufacturer brands.

Be part of the eScooters tribe

More than 1,000 people already follow us to get electric scooter reviews, tips, buying guides and much more.

Designed with the intentions, desires, and interests of the consumer in mind.

DISCLOSURE: As an Amazon Associate ElectricScooterCritic.com earns from qualifying purchases.